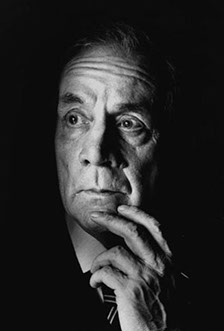 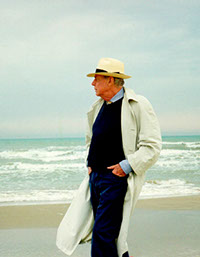 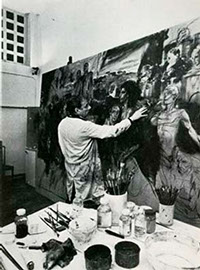 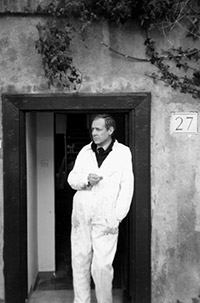 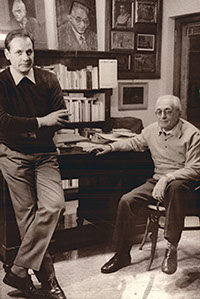 was born in Cesena in 1928. His early works date from 1943–1944 and have clear references to Rosai, Fattori and above all Lorenzo Viani.

The artist spent 1946 in Turin, and then lived in Rome between 1948 and 1951. In 1954 he exhibited at the Galleria del Pincio in Rome alongside Corrado Cagli and Marcello Muccini; two years later he had a first solo show at the same gallery, followed by a second solo show a year later which revealed his personality and poetic world: he had an obvious interest in social commentary, especially in terms of the subtle and persistent existential melancholy caused by life in a big city.

The themes of these works were repeated in two shows in 1958, the first at the Galleria Bergamini in Milan, and then again in Rome at the Galleria Odyssia.These paintings depict the interiors of cinemas, bars, and waiting rooms, in addition to pin-ball machine players.

In 1959 Sughi participated in the Rome Quadrennial with a wall depicting melancholy reaching fever pitch, especially in terms of the difficulty of interpersonal communication in the urban context. His works are darker and the story he tells takes on a cold and forbidding quality.

The introduction of an expressionistic style is evident, and this is repeated the following year in a solo show at the Galleria della Nuova Pesa in Rome. In the early sixties Sughi frequently moved between Rome, Milan and Turin in order to participate or promote meetings between artists involved in looking at contemporary reality; this was driven by Sughi’s need to eliminate the mistrust and lack of understanding in that field of enquiry.

At the same time he organised exhibitions in various Italian cities and for the first time his works depict still lifes of flowers, while the space in which his figures move as they concentrate on daily acts, takes on a Bacon-like feeling.

His work continued, in an almost systematic way, through thematic cycles having the feel of film sequences.

Between 1971–1973 he produced the so-called pitture verdi, dedicated to the relationship between man and nature; the cycle La cena was painted between 1975–1976 and shown at the Galleria d’Arte Moderna in Bologna and the Galleria del Maneggio in Moscow. The twenty paintings and fifteen studies entitled Immaginazione e memoria della famiglia are from the early eighties; in 1985 he produced the series La sera, which is the artist’s reflection on his own role and the value of existence in the context of the contemporary world.

In 1984, as part of an extensive anthological show at the Reggia di Caserta, the large canvas Teatro d’Italia was shown.

In 1986 the Museo Nazionale di Castel Sant’Angelo in Rome organised an anthological exhibition, which then moved to the Museum of Fine Arts in Budapest and the National Gallery in Prague.

Other important exhibitions on Sughi were held at the Casa Masaccio in San Giovanni Valdarno “Un viaggio tra il naturale e l’umano” (1990), at the Museo delle Arti - Palazzo Bandera in Busto Arsizio (1991) and as part of the XII Quadrennial in Rome “Profili”.

In 1993 Sughi was appointed the Chairman of the Rome Quadrennale, that was the first time ever an artist hold the position.

In 1999 his new group of works, Nocturne, was shown at the Galleria Marescalchi, Bologna. One year later  the Palazzo Ducale, Urbino,  hosted the exhibition "Alberto Sughi in the Zavoli's collection" and at the same time  he received the Michelangelo Prize in Rome.

In 2001 the Museo Archeologico d’Abruzzo, Chieti, and the Museo di Santa Croce, Umbertide, organized Minima Moralia, an anthological exhibition of his paintings and drawings.

In 2002 Sughi worked on an interpretation of Dante Alighieri’s Vita Nuova in a cycle of works "Alberto Sughi e Dante" shown for the first time  at the Casa di Dante at Torre de’ Passeri, in Abruzzo.

In 2003 the  exhibition was seen at Palazzo Firenze, Rome,  the Museo Civico, Sansepolcro,  the Biblioteca Malatestiana,  Cesena, and  in 2004 to the Biblioteca Classense, Ravenna.

In 2005 the CSAC and the University of Parma organised an extensive exhibition at the Palazzo Pilotta. Parma.  The exhibition catalogue published by SKIRA reproduced all the works of Sughi, 16 paintings and more than 600 drawings, in the CSAC's collection.  In that  same year Sughi was awarded by the Italian President of the Republic  the Vittorio De Sica Prize for his contribution to art and culture.

In May 2006, news emerged that the prize-winning Japanese artist, Yoshihiko Wada had been accused of plagiarizing the work of Alberto Sughi, having produced several pieces of art virtually identical to pieces from Sughi, and  June, following an investigation by the Agency for Cultural Affairs, the Japanese government stripped  Wada of the prize he won.

In March 2007 a retrospective exhibition of Sughi was presented by Vittorio Sgarbi at the Biblioteca Malatestiana in Cesena. And in July the Museo Vittoriano in Rome held the largest anthological exhibition on Sughi, with about eighty paintings and some sixty drawings produced between 1946 and 2007.

In May 2009 a new large retrospective "Alberto Sughi, Dove va l'uomo" was presented by Maurizio Calvesi at the Palazzo Sant’Elia, Palermo.

In September 2009 the same exhibition was shown at the Italian Institute of Culture in London.

In 2011 Alberto Sughi’s new painting "Un mondo di freddo e di ghiaccio", was selected for the 54th Venice Biennale. The painting was presented to the public at the Italian Pavilion, in Venice, when the Biennale opened on 4 June 2011.

Between 2005 and 2009 Sughi was a regular blogger writing on art and society for the American Absolutearts.com.

Two years later, in 2014, a collection of his texts written between 1958 and 2008 was published by Allemandi Editore under the title Alberto Sughi, Il mio lavoro di pittore.